You have permission to edit this article.
Edit 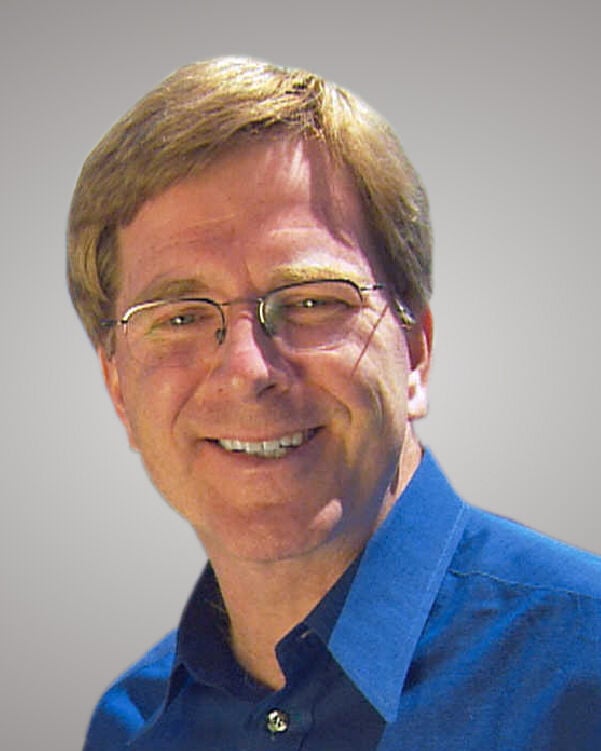 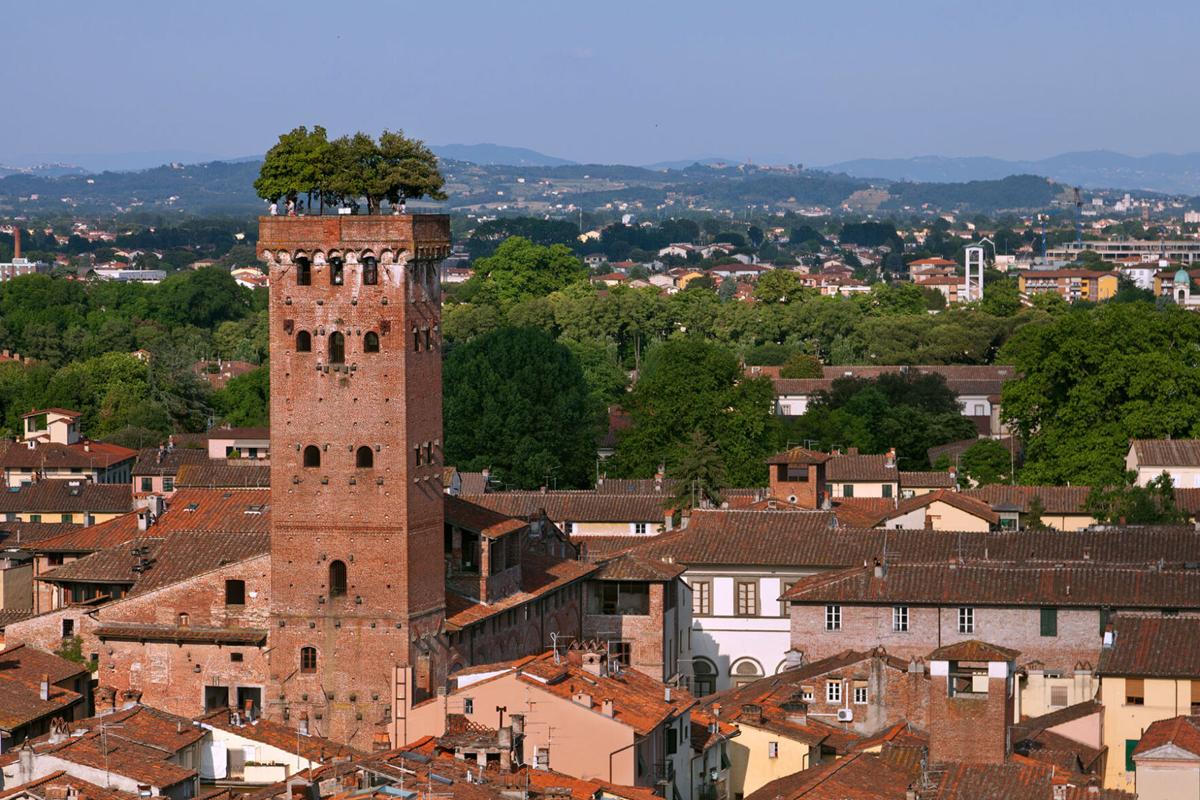 One of Lucca’s surviving towers is the Torre Guinigi, with 227 steps leading up to a small garden of fragrant trees. 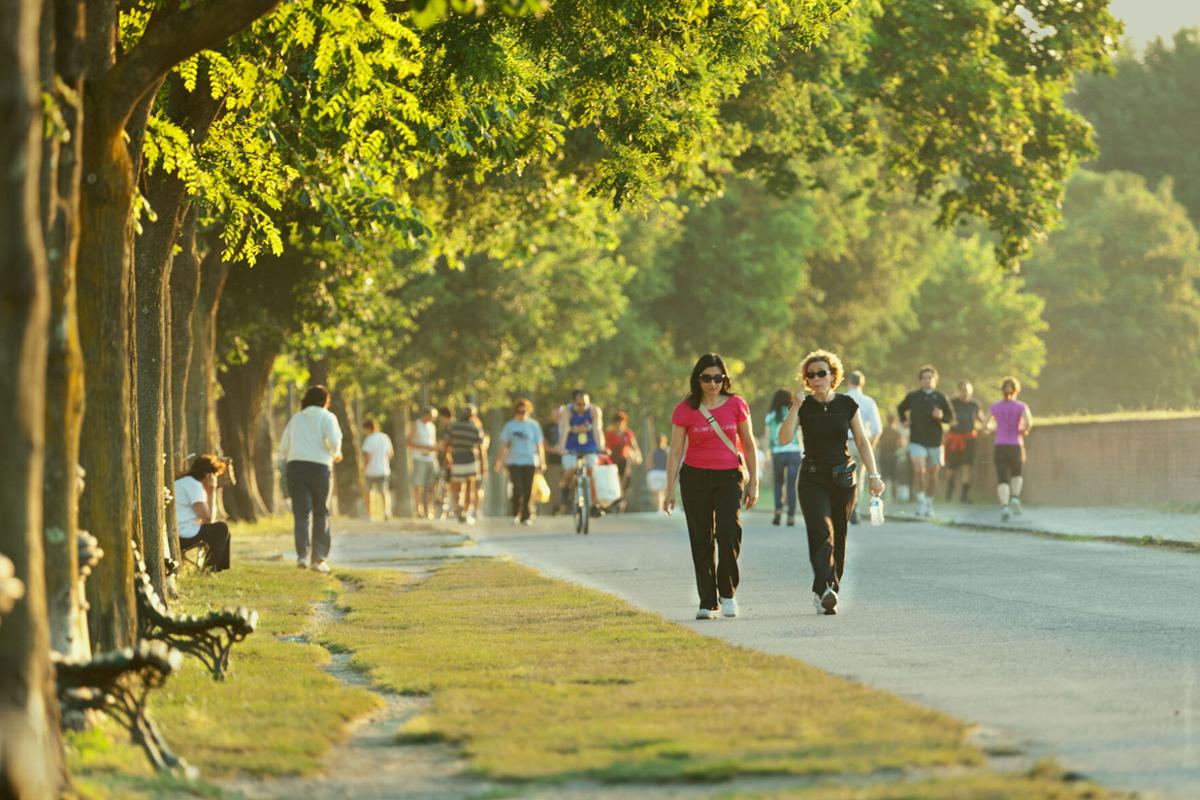 A visit to Lucca is incomplete without a leisurely evening “passeggiata” along the city walls.

One of Lucca’s surviving towers is the Torre Guinigi, with 227 steps leading up to a small garden of fragrant trees.

A visit to Lucca is incomplete without a leisurely evening “passeggiata” along the city walls.

On a sunny summer evening in Lucca, Italy, I was inspired by the simple joy of watching an old man bicycling with his granddaughter atop the wide, fortified wall that once protected this proud city from its enemies -- and now seems to corral its Old World charm. Then, on rented bikes, a group of chatty tourists frolicked by. Their enthusiasm was contagious. Squinting at the energy in their smiles, surrounded by dazzling sunshine, it struck me that the sun in Italy seems to have a special glint. It's as if it's telling visitors, "Embrace life!"

The home of opera composer Giacomo Puccini, Lucca has no single monumental sight. It's simply a uniquely human and well-preserved city. Even its touristic center -- the mostly traffic-free old town -- feels more local than touristy (aside from a few cruise excursions from nearby Livorno that pass through each day). Neighboring Pisa has the famous tipsy tower you can climb, but lesser-known Lucca is a favorite stop for many Italy connoisseurs. Just a 30-minute bus ride from Pisa and an hour's drive from Florence, it's easy to do Pisa and Lucca in a one-day trip from Florence.

Lucca began as a Roman settlement. In fact, the grid layout of the streets (and the shadow of an amphitheater) survives from Roman times. As was typical for Roman towns, Lucca's two main roads quartered the fortified town, crossing at what was the forum (main market and religious/political center) -- today's Piazza San Michele. The amphitheater sat just outside the original Roman walls.

The city is a bit of a paradox; while it has Europe's mightiest Renaissance wall, it hasn't seen a battle since 1430. My friend explained to me the difference between a Renaissance wall and a medieval wall. Medieval walls are thin, because with weapons like arrows and stones, there was no need for thick fortification. But in Renaissance times, the advent of powerful cannons introduced the need for thicker, more substantial walls.

These days, locals treat their ramparts like a circular park. And, with plenty of rental bikes available, visitors can enjoy a lazy pedal around its two-and-a-half-mile circuit. It's a wonderfully smooth 20-to-30-minute pedal, depending on how fast you go and how crowded the wall-top park is. The best people-watching -- and slowest pedaling -- is during "passeggiata" time, just before dinner, when it seems that all of Lucca is doing slow laps around the wall. Within the wall, Romanesque churches seem to lurk around every corner, as do fun-loving piazzas filled with soccer-playing children.

In its heyday, Lucca packed 70 churches and over 100 towers within its walls. Each tower was the home and private fortress of a wealthy merchant family. Towers were single rooms stacked atop each other: shop, living room, and then the kitchen, all connected by exterior wooden staircases. The rooftop was generally a vegetable garden, with trees providing shade. Later, the wealthy city folk moved into the countryside, trading away life in their city palazzos to establish farm estates complete with fancy villas.

The main pedestrian drag of Lucca is Via Fillungo. Strolling here, you'll connect the town's two busiest squares: Piazza dell'Anfiteatro and Piazza San Michele. Between the two, you can get a taste of Lucca's rich past, including several elegant, century-old storefronts.

At delightful Piazza dell'Anfiteatro, you'll feel the architectural ghost of the town's Roman amphitheater. With the fall of Rome, the theater (which seated 10,000) was gradually cannibalized for its stones and inhabited by people living in a mishmash of huts. The huts were cleared away at the end of the 19th century to better show off the town's illustrious past and make one purely secular square for the town market (every other square is dominated by a church). While the arena's long gone, its oval shape is a reminder of the city's classical heritage.

Piazza San Michele also has ancient roots. It's hosted a market since Roman times, when it was the forum. Today it's dominated by the Church of San Michele. Towering above its fancy Romanesque facade, the archangel Michael stands ready to flap his wings -- which, thanks to a crude mechanical contraption, he actually did on special occasions.

Nearby, the Church of San Giovanni hosts nightly concerts celebrating the music of Puccini -- one of Italy's greatest opera composers (you may know La BohÃƒÂ¨me, Madame Butterfly, or Tosca). Puccini's delightful arias seem to capture the spirit of this wonderful corner of Italy.

If you have time for more than a touristy quickie at nearby Pisa, consider slowing down, grabbing a gelato, and basking in Lucca's genuine charm.

EATING: Canuleia Trattoria is an atmospheric place for Tuscan cuisine. Eat in their dressy dining room or outside on the garden courtyard (moderate, Via Canuleia 14, www.canuleiatrattoria.it). La Bottega di Anna & Leo is a lovable little pastel eatery with a simple menu and a passion for quality (moderate, Via San Frediano 16, www.labottegadiannaeleo.it).

GETTING AROUND: Don't bother driving within the walls. Instead, spend your time strolling or biking around town.