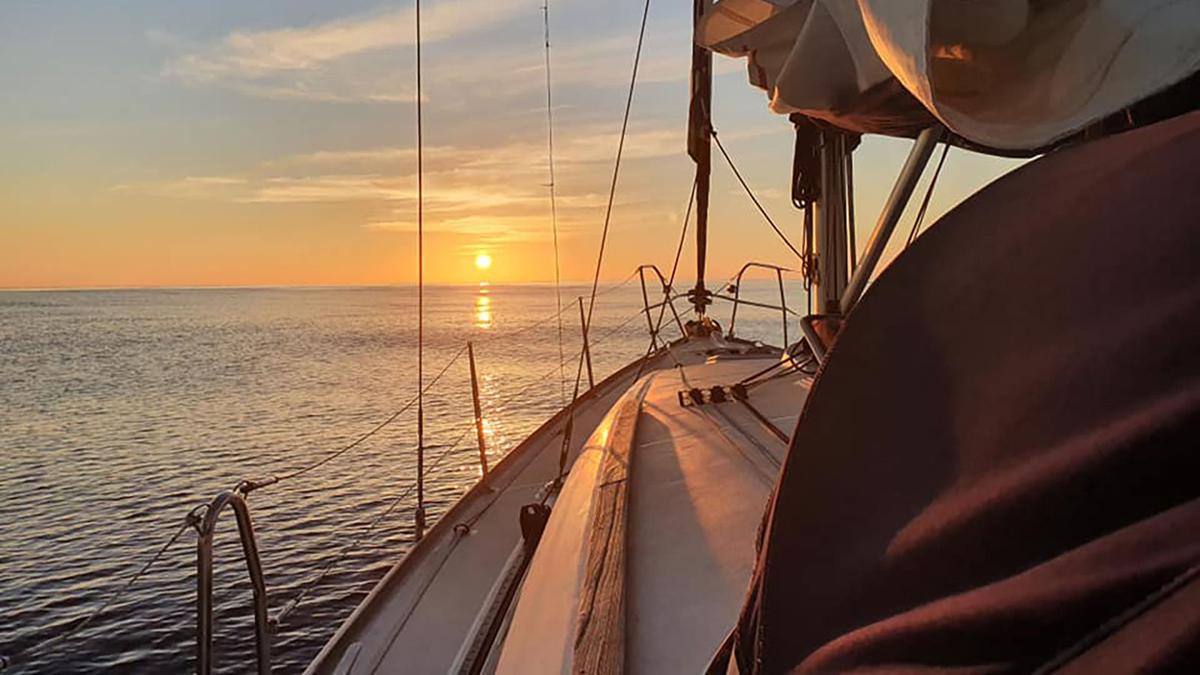 In a given year, an estimated 10,000 small boats, sailed by families and individuals, are out exploring the world's oceans. 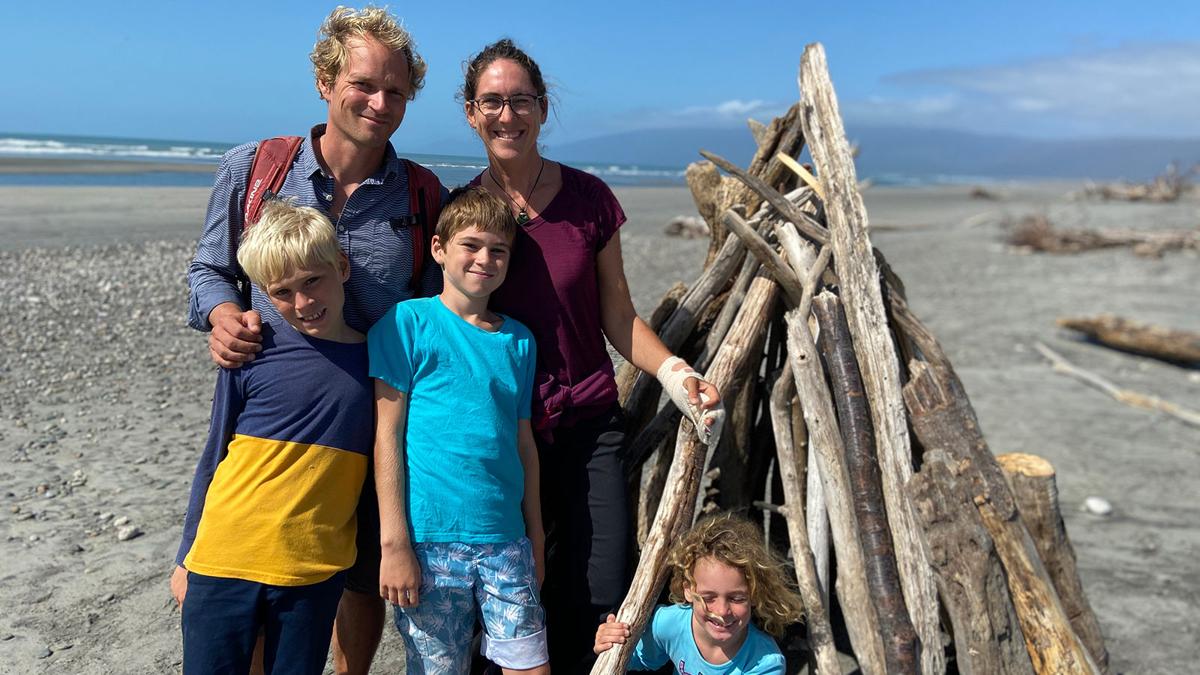 The Neve family had planned to finish up their family sabbatical when they reached Australia at the season's end in November. But now they're stuck and sorting through limited options. 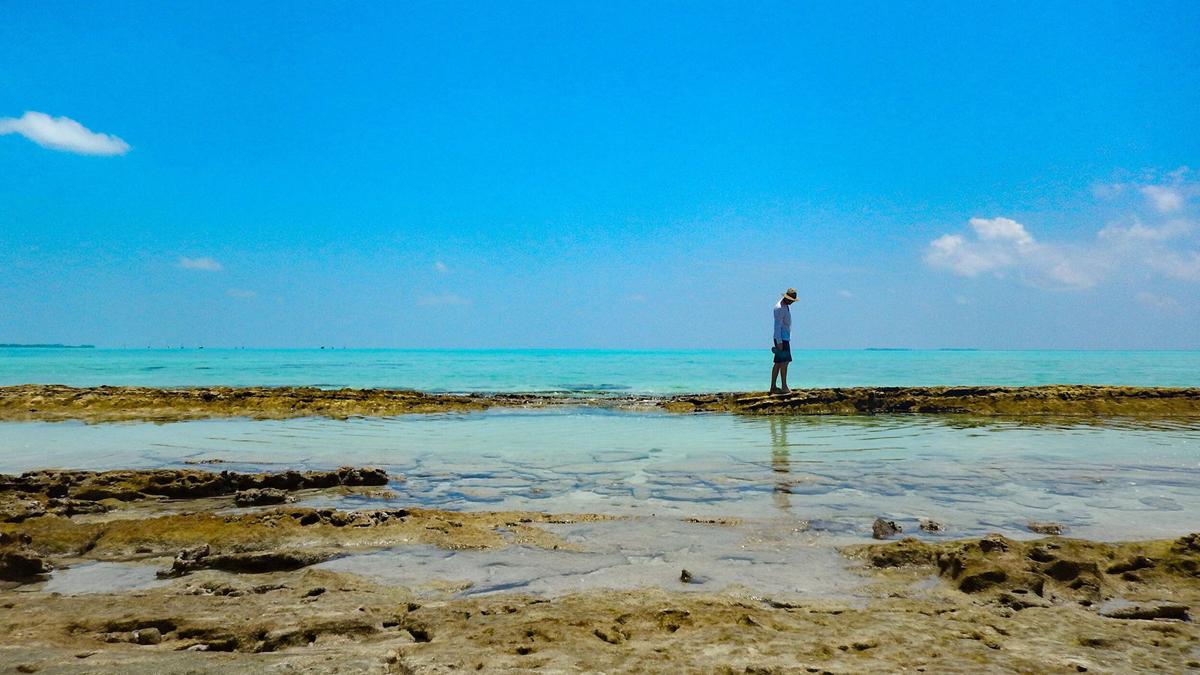 Leslie and Andrew Godfrey have been sailing around the world for four and a half years. 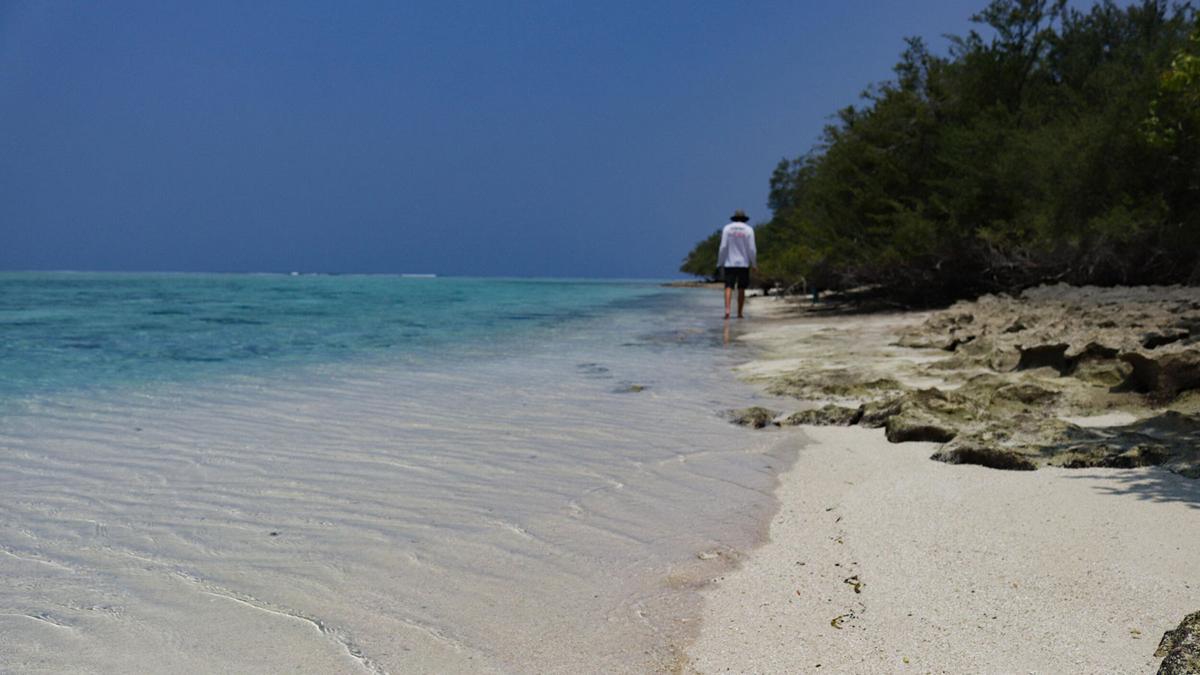 The 38-year-old Las Vegas-based Godfreys started planning for their five-year sailing journey around the world back in college. 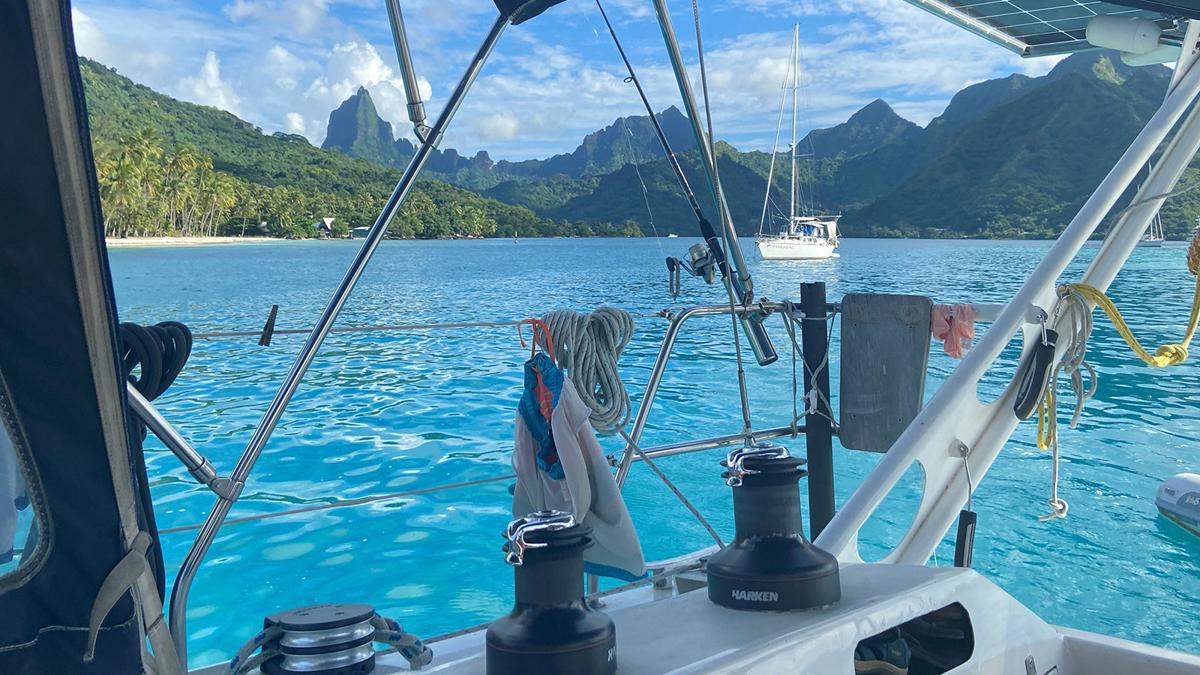 The coronavirus pandemic has made it challenging for long-term sailors. But the views can be nice.

While 38-year-olds Leslie and Andrew Godfrey enjoyed a five-day, 750-mile sailing passage from Sri Lanka to the Maldives, the whole world changed.

Without internet access, the couple had yet to learn that COVID-19 had continued to spread, becoming a pandemic.

From March 7 to 12, as they sailed across the Laccadive Sea toward the iridescent blue water of the northern Maldives, ports had begun slamming shut at a rate that no small sailboat could keep up with.

In a given year, an estimated 10,000 small boats, sailed by families and individuals, are out exploring the world's oceans.

They travel from country to country along traditional trade routes, which are dictated by seasonal changes. When cyclone season comes, the goal is to be one step ahead of the storms.

This year, there's a different problem. When COVID-19 brought the world to a halt, these sailors, whose boat is often their only home, became stuck.

By the time the Godfreys made landfall, the Maldives had discovered their eighth case of COVID-19.

"Our check-in procedure was interrupted when officials were called to an emergency meeting," Leslie writes in her blog. By the time the officials returned, the Maldives had declared a state of emergency.

The Las Vegas-based Godfreys started planning for their five-year sailing journey around the world back in college.

Sonrisa, their 39-year-old Valiant 40 sailboat, is tiny by house standards. But after two labor-intensive refits that saw them doing everything from making the hull stronger with fiberglass to varnishing the table, their home is seaworthy and comfortable.

For the past four and a half years, they've anchored off tropical islands and vibrant cities, discovering what it means to travel slowly enough to get to know people, places and yourself more deeply.

Their stay in the Maldives was to take them south along the length of an archipelago inhabited by giant manta rays, dolphins and whales, where they'd meet the seafaring population who are famed for their hospitality. From there, they would visit the other islands of the Indian Ocean as they sailed to South Africa.

Countries such as the Maldives are in a difficult position when it comes to managing voyaging sailors. Its first priority is to stop virus transmission. But the Maldives also recognizes the pandemic as a humanitarian crisis.

With the goal of protecting their own population, officials have isolated boats including Sonrisa in one area, delivering basic supplies and permitting access to a deserted atoll.

Two months on, the Godfreys are still in that same seemingly idyllic spot. In reality, they're unable to go forward or back.

Meanwhile, the Maldives have entered a season known locally as Kethi, and monsoon storms have set in. "This is a triage situation," Leslie writes.

She and Andrew are weighing their options: Do they wait things out in the relative security of the Maldives, or do they try to get closer to home by sailing onward to a yet-to-be determined country?

What they don't want is to go where borders are closed, "to be cast back out to sea to circle endlessly between closed countries picking up fuel, food and water."

Sailing during a pandemic

At the best of times, long-distance sailing requires luck, grit and the ability to adapt on the spot. But during a pandemic, it turns out "sailing into the sunset" isn't the romantic back-up plan that isolating land dwellers might imagine it is.

Sue Richards, editor of Noonsite, a vital online resource for long distance sailors, explains the problem. "Small live-aboard yachts are getting treated the same as cruise ships in the majority of countries."

But unlike cruise ships, which have professional crew and the capacity to cross stormy oceans in search of a friendly port, these are small vessels run by recreational boaters. The families and individuals aboard the boats also spend ocean passages isolated for long periods — kind of a built-in quarantine.

"It's beginning to feel like the boats making the passage up the Red Sea are bit parts in a disaster B-movie," Susie Harris, 62, writes in her blog. She and her husband, 53-year-old Kevin, are trying to make their way home to Ireland aboard their 47-foot sailboat Temptress of Down.

Departing the United Kingdom in 2013, the couple sailed across the Atlantic through the Caribbean and then across the Pacific, from Panama to Singapore. This year, the plan was to head through the Indian Ocean to the Red Sea and Suez Canal and then through the Mediterranean and eventually home to their elderly parents.

Instead, just as they hit the Red Sea, ports began closing.

"We always knew the Red Sea would be hard, but the virus turned it into a nightmare of uncertainty," Susie writes of the notoriously windy body of water. After leaving Djibouti on March 7, they learned that Eritrea, Sudan and then Egypt, all countries where they planned to stop for food, fuel and exploring, had closed their borders, and some were forcibly turning away sailors.

At best, they were providing expensive emergency fuel and supplies.

The Harrises had no choice but to push on, dealing with sand-laden wind, adverse currents, engine problems and, most worryingly, the breakdown of their reverse osmosis water-maker, a machine that many sailors use to make drinking water.

"Facing the possibility that we might not have enough water, fuel or food to survive has taken a huge toll," Susie emails from a temporary stop off Crete after making it through the Red Sea.

As both the Harrises and their boat, which needs urgent repairs and hard-to-source spare parts, are too exhausted to safely sail the remaining 3,000 miles to Ireland, their current hope is that Greece will let them in.

Countries that have been willing to take in sailors are facing their own issues.

In French Polynesia, the first stop of the fabled Coconut Milk Run across the South Pacific to New Zealand or Australia, an estimated 500 boats have arrived.

With a sailing season that kicks off in early March, hundreds of boats were already on their 15- to 40-plus-day passages from the west coast of the United States, Mexico and Panama before the COVID-19 crisis was well understood.

More boats followed, as optimistic skippers assumed the situation would resolve itself. Instead, as countries to the west closed their borders, hundreds of sailboats bunched up in French Polynesia.

Sailors usually spend eight months making their way through the thousands of islands scattered across the South Pacific because they're intriguing and because they offer refuge. Stormy weather rolls across the Pacific at irregular intervals; by using "weather windows," sailors can sail safely from island to island and dodge the worst of it.

To stay at sea or go home?

Nathalie and Michael Neve, along with their kids Naomie, 7, Bastien, 9, and Noah, 11, were already in French Polynesia as the restrictions set in.

They got long-stay visas last year, so the Oregon-based family was going to explore French Polynesia until the end of April and then start sailing west and finish up their family sabbatical when they reached Australia at the season's end in November.

Instead, as the first of what became 60 cases were discovered, French Polynesia followed France's lead and locked down. The Neve family was ordered to isolate aboard 43-foot Ubi. They couldn't go to shore or even swim in the water they were anchored in.

"Locals couldn't go to the beach to swim, so we had the same rules. It was hot, but we made the best of it," Nathalie tells CNN Travel over WhatsApp.

With boats piling up, sailors on a Facebook site for French Polynesia sailors noted locals were becoming suspicious of the strangers who kept arriving.

They said some worried that a disrupted supply chain meant there won't be enough food or medical supplies for everyone. A recent news report also detailed Faa'a residents' anger over the boats. Some have requested a meeting with authorities to discuss the issue.

The Neve family is trying to sort through limited options. That includes leaving their boat in Tahiti and flying home on expensive repatriation flights (if they can find one going to their country), attempting to sail to Hawaii and then back to North America or pushing on across the Pacific and hoping a country will let them in.

Richards says Noonsite has been receiving worried emails from sailors around the world as hurricane/typhoon/cyclone season looms. She explains that often the distance sailors have to travel to get home can be thousands of miles and take weeks, if not months, and "is just too large to not have refuge port options."

Working with sailing organizations such as the Seven Seas Cruising Association and the Ocean Cruising Club as well as embassies, official authorities, marine business owners and sailors, the small Noonsite team worked around the clock trying to keep up with restrictions and safe options.

In the Caribbean, they were able to pull together a list of refuge ports for boats needing to get across the Atlantic to repatriate to Europe — something they hope to do in the Pacific and the Indian Oceans as well.

For now, many people on their small boats continue to isolate and wait.

In an unpopulated atoll in the Bahamas, the Swedish-American Trautman family — Brian, 43; Karin, 33; and baby Sierra — are caught between hurricane season and a pandemic.

The plan had been for the popular YouTubers to pick up Brian's brother, Brady, and then head north aboard the 53-foot Delos to Newfoundland and Greenland and through the Northwest Passage to Seattle, completing the circumnavigation they began over 10 years ago.

Instead, they've spent 80 days sheltering in a remote anchorage along with eight other boats.

"I feel like we've been preparing for this our entire sailing career," Brian told CNN Travel over Zoom. There's no nearby medical care, and groceries take three days to be delivered by local freighter from Nassau.

But Brian explains they've learned to be self-sufficient: "We have months of food and fuel and can make our own water and alcohol."

The hardest part for the nomadic couple is the emotional reality of why they can't move. But for now Brian says they're safe and well and making the most of the slower pace.

"Lemonade out of lemons," he says.

Travel during pandemic: 6 things to know

Here are some things that can help you navigate these difficult times and plan for the future.

2. What about my elite status with my airline's loyalty program?

5. Should I make plans for a summer vacation?